Hawaiian National Sovereignty: Truth, Justice and Reconciliation in the Nation of Hawai‘i 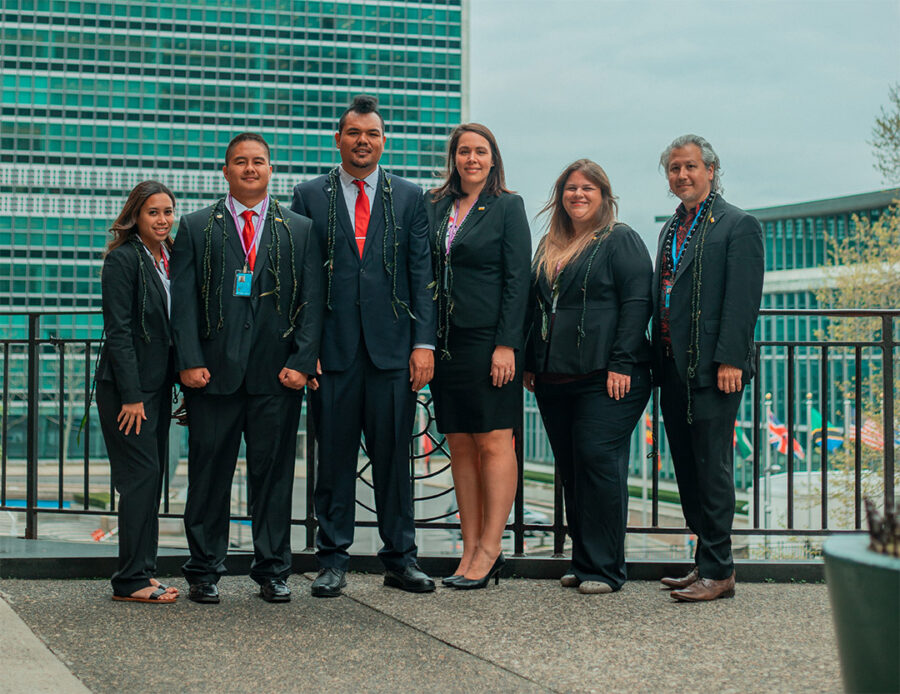 It seems fitting that over 15 years later, and on the 28th anniversary of the signing of U.S. Public Law 103–150, the Apology Law, that I am once again writing about finding unity within the often divisive issue of Hawaiian sovereignty politics and perspectives.  Nation of Hawai‘i’s history of peaceful coexistence with the U.S. and the State of Hawai‘i and its daily affirmation of Hawaiian National Sovereignty, under the Apology Law and the UN human rights framework, is the focus of this paper.

My own journey of finding my place in the Nation after living in diaspora is a common story experienced by many Hawaiians who must leave Hawai‘i for educational and employment opportunities.  I was born in Hilo, Hawai‘i to a Kanaka father and a haole mother but moved to Connecticut when I was 11.  During the summer of 2006, after being in diaspora for almost a decade, I came to Oahu to do research for my senior honors thesis for my undergraduate degree at Wesleyan University.  I did archival research and interviews about Queen Lili‘uokalani’s legacy and how she could be a unifying force in Hawaiian sovereignty politics with various leaders doing work to advocate for Hawaiian rights.  I reached out to Pu‘uhonua B.K. Kanahele, Head of State for the Nation of Hawai‘i (hereinafter, Uncle Bumpy) but for some reason, we never connected that summer.  I sometimes wonder what my life, professional trajectory, and my thesis would have looked like had he been one of the Hawaiian leaders I spoke with that summer.  Ironically, many years later, during my final year at the William S. Richardson School of Law at UH Mānoa, Match.com connected me with Uncle Bumpy’s then Chief of Staff, Brandon Maka‘awa‘awa, who later became the Deputy Head of State for Nation of Hawai‘i and my husband.

Nation of Hawai‘i was a place of learning and healing for me because I had always been searching for a way to give back to the Hawaiian community for the many opportunities I had been provided with and to reconnect after living in diaspora for 15 years on the continent, as so many Hawaiians are forced to.

Meeting Uncle Bumpy and getting to know Pu‘uhonua o Waimānalo and its people changed my life.  I had studied Hawaiian sovereignty and spoken to various people about its meaning, but I truly didn’t understand it on a visceral, na‘au level until I visited Pu’uhonua o Waimānalo and felt the shift as I crossed the gate and the boundary that separated the Nation from the State of Hawai‘i and the U.S.  Something was different about the air, the land, and the people and it was because in this place, Hawaiian National Sovereignty lives, breathes, and has space to thrive.  Many scholars have discussed Hawaiian sovereignty in terms of political governance.  However, at its root, the Nation taught me that true sovereignty is fully allowing a people to be themselves.

Hawaiian National Sovereignty means that Hawaiians, the first people of this land, get to fully be themselves through political, economic, social, and cultural lenses without interference by outside forces, including the current illegal occupation by the State of Hawai‘i and the U.S.

My time as a Governance Specialist in the Advocacy Department at the Office of Hawaiian Affairs was a frustrating experience at times because a state agency can never be the entity to help Hawaiians as a people come together and decide on a governance structure.  However, I had the time to study and learn how other indigenous peoples have exercised their sovereignty.  I also learned about the international indigenous human rights framework and how it can help Hawaiians precisely because it is outside of the State of Hawai‘i and U.S. frameworks, which by their very nature can never permit true sovereignty for Hawaiians.

My research affirmed that Hawaiians are in a very unique position.  Even without a globally recognized, unified government, Hawaiians have state, federal and international recognition as a people entitled to their own government, sovereign lands, and all the other vestiges of sovereignty.  Hawaiians also have access to state and federal programs even without a formally recognized government whereas so many indigenous peoples in the U.S. and around the world are fighting for any recognition at all by their Member States.

Legal scholars have misinterpreted the Apology Law.  In my view, it is the most expansive iteration of indigenous rights in the U.S. and maybe even worldwide.  Nation of Hawai‘i has spoken and written about the Apology Law in various international forums, including the UN Permanent Forum on Indigenous Issues, various Special Rapporteurs and EMRIP and emphasized how this U.S. legal document not only has clear admissions by the U.S. about the illegal overthrow of the Hawaiian Nation and the unlawful theft of Hawaiian National Lands, but most importantly, it makes a clear promise that there will be a reconciliation process with the Hawaiian people.

Legal scholars who do not understand the significance of the Apology Law on a practical level have downplayed its importance.  However, the very fact of Nation of Hawai‘i’s existence, its recognition by other indigenous nations, UN bodies and Member States, and its sovereign land base of Pu‘uhonua o Waimānalo within the State of Hawai‘i, illustrate how important and groundbreaking the Apology Law is.

My years as a civil rights attorney allowed me to view the Apology Law in a new light.  Some have critiqued the lack of monetary and land reparations spelled out explicitly in the Apology Law to mean that it lacks power.  However, it actually highlights that the Apology Law in and of itself recognized that the U.S. government and the State of Hawai’i could never define what justice means for Hawaiians because the U.S. government was the party that had injured Hawaiians in the first place.  Oppressors can never tell the people who they hurt what truth, justice, and reconciliation means to them.  Instead, the Apology Law affirms that true justice, healing, and ho‘oponopono will only be achieved when Hawaiians, the U.S., and the State of Hawai‘i come together on equal footing and as sovereigns to discuss what truth, justice, and reconciliation means and what it looks like in practice.  True reconciliation can never occur if the U.S. is permitted to tell Hawaiians who we are, what sovereignty means to us, and what we deserve for the multigenerational and ongoing wrongdoings perpetrated against our people by the U.S. and the State of Hawai‘i.

Nation of Hawai‘i is occupying and holding space for future negotiations and reminds everyone of the Apology Law’s true significance and power and the promise of a better life and future for all Hawaiians.

59. In another example, the Congress of the United States of America issued an apology to native Hawaiians in 1993 for the overthrow of the Kingdom of Hawaii, recognizing that it had resulted in the suppression of the “inherent sovereignty of the Native Hawaiian people”. The apology also called for reconciliation efforts. However, as pointed out by the Special Rapporteur on the rights of indigenous peoples, the call for reconciliation remained unfulfilled, while a growing movement of indigenous Hawaiians challenged the legitimacy and legality of the annexation of Hawaii following the overthrow, as well as the process by which Hawaii had moved from its designation as a non-self-governing territory under United Nations supervision to being incorporated into the United States as one of its federal states in 1959. The Special Rapporteur added that, in the meantime, indigenous Hawaiians saw their sacred places under the domination of others and they continued to fare worse than any other demographic group in Hawaii in terms of education, health, crime and employment (A/HRC/21/47/Add.1, paras. 65–66) (internal footnotes omitted).

This form of international recognition of the Apology Law by a UN body affirms the stance that Nation of Hawai‘i has taken with respect to Hawaiian National Sovereignty, as well as the continuing work that needs to be done for Hawaiians to achieve meaningful reconciliation.

The Nation and its many initiatives and projects use the ahupua‘a system as a framework and Pu‘uhonua o Waimānalo is the sovereign land base where the ahupua‘a system lives.  In ‘Ōlelo Hawai‘i, sovereignty has been defined as ea but ahupua‘a makes more sense in many ways because it links the land, the people and the relationship they have to each other.  Western systems of governance, including the term sovereignty, could never fully capture what Hawaiian National Sovereignty means but the Hawaiian words and concepts of ahupua‘a, pu‘uhonua, ‘āina and aloha are a good start.

Nation of Hawai‘i has always encouraged Hawaiians, regardless of where they live in the world and where they are in their journey of learning and understanding what Hawaiian sovereignty means to them, to participate in the way that is best for them.

I was invited to begin my journey 7 years ago and I still marvel and appreciate every time I get to visit Pu‘uhonua o Waimānalo and learn about the amazing work Nation of Hawai‘i and its citizens and allies are engaged in.

This paper is both a love letter to Queen Lili‘uokalani, who has been my guiding force since that thesis summer in 2006, and a heartfelt mahalo to Uncle Bumpy, our Head of State and the heart and soul of Nation of Hawai‘i.  Mahalo for inviting me to find my place in the ahupua‘a and for making Hawaiian National Sovereignty real, tangible and heartbreakingly beautiful when I finally made my way back home.

Nation of Hawaii Ambassador-At-Large, Minister of Foreign Affairs and Minister of Treasury Appointed

0 Comments on "Hawaiian National Sovereignty: Truth, Justice and Reconciliation in the Nation of Hawai‘i"