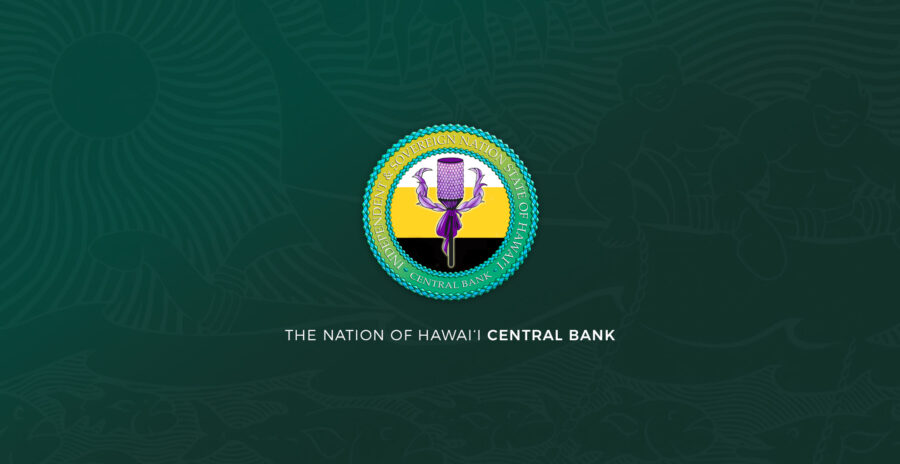 Waimānalo, Oʻahu, November 23, 2021 — On November 23, 1993, President Bill Clinton signed U.S. Public Law 103-150, the “Apology Resolution,” officially acknowledging the overthrow of the Kingdom of Hawaii. On this 28th anniversary of the signing, The Nation of Hawai’i is pleased to share recent developments towards creating a flourishing independent Hawaiian economy, and to announce the establishment of the Nation of Hawai’i Central Bank.

Nation of Hawai‘i enacts and protects the rights of its people, waters, and lands through the application of innovative systems rooted in culture and structured in the framework of the ahupua’a. The ahupua’a is a highly organized, self-sufficient, subsistent social system based on communal land tenure.

Much like the ahupua‘a in the natural world, Nation of Hawai‘i has structured its ‘Ahupua‘a Economics’ system to manage the flow of socioeconomic resources, ensuring that all citizens including the most fragile in our communities are able to flourish. The recent establishment of a central bank and official digital currency –as well as new revenue streams, business development services, and partnerships with forward thinking organizations such as MIT– is providing Nation of Hawai‘i citizens and businesses with viable opportunities to increase socio-economic status and simultaneously stimulate the economy.

Through the Nation of Hawai’i Bank Act, signed and enacted in September 2021, we have established a central bank in The Nation of Hawai’i to regulate credit and digital currency in the best interests of the economic life of the nation. Economically, the bank and digital currency will help the Nation of Hawai`i capitalize on the advantages of our unique position in the center of the Pacific Rim and opportunities to become a center for ethical investment and financial services. At the same time, investments in national security will facilitate the diversification of our local economy with profitable and innovative community based projects, producing meaningful employment and furthering local and national self-sufficiency.

Together with local and international partners, The Nation of Hawai’i is leveraging its financial foundation and traditional knowledge to develop sustainable, practical solutions to significant issues. On our sovereign land base, Pu‘uhonua o Waimānalo, we are working with partners on innovative technologies that sustainably utilize our ahupua‘a, including technologies to regenerate ecosystems, remediate toxic waters, and mitigate invasive forestation, to name a few. For example, experts use advanced drone and mapping technologies to create 3D restoration and development plans for our ahupua‘a, which assists long-standing efforts to remove invasive trees and up-cycle them into products to support Nation of Hawai‘i’s GDP.

The shift to a focus on economic independence and innovation is creating alternative, non-political pathways towards uniting the Hawaiian people. We invite you –fellow Hawaiians, residents of Hawai’i, and international supporters and commerce partners– to collaborate with us on this exciting new chapter in developing a strong and innovative future for Hawai’i.

About The Nation of Hawaii

Download a PDF of the full press release: https://www.nationofhawaii.org/uploads/2021/11/NOH_Nov232021_PressRelease.pdf

Hawaiian National Sovereignty: Truth, Justice and Reconciliation in the Nation of Hawai‘i

Nation of Hawaii Ambassador-At-Large, Minister of Foreign Affairs and Minister of Treasury Appointed

For the first time in 25 years, the Nation of Hawai’i is…