WAIMANALO, HI – The Independent & Sovereign Nation of Hawai’i and the Timbisha Shoshone Tribe are proud to announce the signing of a Perpetual Peace and Constant Friendship treaty, during a special ceremony held at Nation of Hawai‘i’s landbase, Pu’uhonua O Waimānalo.

This historic treaty marks the beginning of a promising relationship between the two nations and reaffirms their commitment to Aloha, peace, mutual respect, and understanding in fostering a just and prosperous world. The treaty, signed by leaders from both nations, on January 13, 2023, establishes a framework for ongoing economic development and trade, cultural exchange and environmental protections.

The Nation of Hawaii’s mission includes ongoing international relations with tribes and nations across the continent, extending our mission of world peace, Aloha and reinforcing humanitarian rights for all indigenous peoples globally.

“We are honored to be able to formalize our friendship with the Timbisha Shoshone Tribe in this way,” said Pu‘uhonua D.B.K Kanahele, President of the Nation of Hawai’i. “This treaty is a tribute to the strong bond that exists between our nations, and we look forward to continuing to build on this relationship in the years to come.”

The Timbisha Shoshone Tribe received federal recognition in 1983, establishing their landbase 17 years later on November 1, 2000 with the signing of the Timbisha Homeland Act. The Act transferred more than 7,700 acres of land in California and Nevada to the tribe.

“This treaty is a significant step forward in our ongoing efforts to promote peace and understanding among all nations,” said Jimmy-John Thompson, Chairman of the Timbisha Shoshone Tribe. “We are pleased to be able to count the Nation of Hawai’i as a close friend and ally, and we look forward to working together to build a better future for all of our peoples.”

The Timbisha Shoshone ancestral homelands encompass what is known today as Nevada and California, spreading through the counties of Inyo, Kern, San Bernardino and Mono in California and Nye, Mineral and Esmeralda in Nevada.

The treaty will be ratified by the leadership of both nations in the coming weeks.

About The Nation of Hawaii

The Nation of Hawai‘i was promulgated on January 16, 1995, pursuant to U.S. Public Law, 103-150, the Apology Law. The Nation’s landbase is located on 45 acres at Pu’uhonua O Waimanalo on O’ahu, Hawai‘i. The official language is ‘Olelo Hawai‘i.

Nation of Hawai‘i’s mission is to restore, maintain and preserve the sophisticated religion, language and culture of the Native Hawaiian people, who prior to the overthrow, lived in a highly organized, self-sufficient, subsistent social system based on Communal Land Tenure. (pre-mahele.) For more information and ongoing development of the Nation of Hawai’i’s journey of independence, visit www.nationofhawaii.org.

For more about the Timbisha Shoshone Tribe, visit them online at www.timbisha.org. 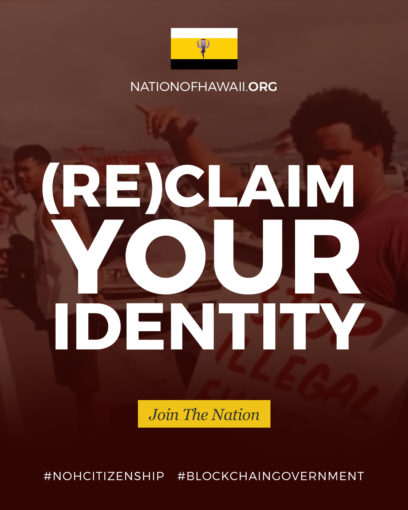